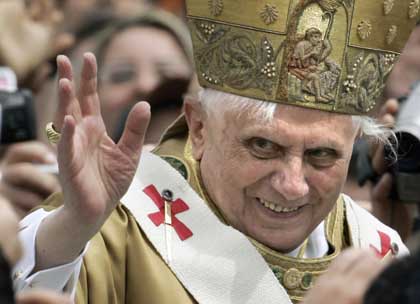 Pope Benedict XVI waves to the crowd from his papamobile after celebrating his first mass in St Peter’s Square at the Vatican 24 April 2005. Hundreds of thousands of pilgrims flocked to the Vatican early Sunday for the inaugural mass of Pope Benedict XVI, who was to be installed as the Roman Catholic Church’s 265th pope. AFP PHOTO PAOLO COCCO