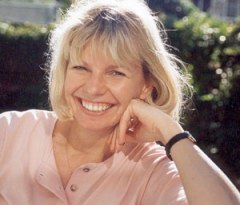 Juliet Sharman-Burke will be teaching tarot at the Omega Institute Tarot Conference in June and in Melbourne and Sydney in August. The following is an interview conducted by Annie Dunlop, president of the Tarot Guild of Australia who interviewed her for “The Magician” journal (reprinted by permission).

Juliet has produced three tarot decks since 1986 – The Mythic Tarot with Liz Greene, the Sharman-Caselli deck, and an innovative “color it yourself” deck. She has also written eight tarot books.

Juliet, how would you describe yourself?

I am primarily a psychotherapist these days, with four days a week taken up with regular patients, but I do as many Tarot readings as I can fit in, and teach once a term for the Centre for Psychological Astrology. I love teaching and am looking forward to a conference in the Hudson Valley in June with Rachel Pollack and Mary Greer, and of course I am really looking forward to being in Australia and meeting the Tarot Guild members!

When did Tarot first come into your life?

I found my first Tarot deck and book by accident in a bookshop while on holiday with a friend. We were intrigued by the title, which was something like Tell Your Future with the Cards! As I was nineteen at the time, I was longing to know whether I would marry the current beau, and what my future would be, so we bought the book and cards between us, it was the Marseilles deck, and proceeded to try to tell our futures. We were not very good and my friend lost interest and let me keep the cards. I persevered on my own and found that while I was not terribly good at reading my own cards, I was having unexpected success with others. I started reading more, and learning astrology too, but in those days there were not many books or cards and many of the old books were very complicated. I collected notes from the books I could find and came across the RWS deck, which I found much easier to relate to than the Marseilles or the Visconti, which I owned. I decided to write a book for myself, using the notes I collected, and gradually started do more readings first for friends and then strangers. A client wrote a magazine article about me, and the readers’ response to the article, asking if I would do a correspondence course, inspired me to develop a course, which turned into my first book, The Complete Book of Tarot.

If you could take any Tarot deck to a deserted Island, would it be one of yours?

Yes, it would be the Mythic Tarot, because the mythic stories never fail to delight me.

You have such a deep knowledge and understanding of mythology; from where did this passion develop?

I have always responded to stories that describe or illustrate something that might otherwise be difficult to understand. Myths work on so many levels, and can be looked at from many different perspectives, so that something extremely deep and complex can be understood quite simply when told in story form.  The archetypal nature of myth speaks to us all, which makes it accessible.

The utilisation of mythology in the Mythic tarot adds an extra layer of meaning to what is still primarily a deck of RWS tradition. Did you realise how successful and elucidating the connections with mythology were going to be when you first started this project?

I had no idea. I always loved fairy tales and myths from childhood and when I first heard Liz Greene talk about the horoscope and the planets from a mythological and psychological point of view I was enchanted. I felt that myths could imaginatively add another dimension to the divinatory meanings of each card so Liz and I decided to create a deck that would make it easier to follow. And because the Minor Arcana are often considered to be more difficult to learn than the Majors – even with the RWS deck where they are pictorial – I felt that having a story run through each suit from Ace to Ten would make it much easier to remember the meanings of each of the Minor. And the Court Cards, which again many people struggle with, seemed to make sense from an astrological view point, using the qualities and elements as well as taking a zodiacal perspective, as well as using a mythic figure to further elaborate the meaning of the card. I think perhaps that the Mythic Tarot has captured imaginations because people love myths (they are archetypal and thus speak to us all), yet myth is not always taught in school these days so many people have missed out on them and the cards provide an opportunity to engage with and sometimes learn about them for the first time.

What was the inspiration behind the beautiful Sharman-Caselli Tarot?

The story behind the Sharman-Caselli deck is quite funny really. I was asked to write a beginners book using the RWS deck as illustration, but in the end permission was refused to use the RWS, so the publishers suggested I design a new deck myself that was traditional, good for beginners and could stand alongside a popular deck like the RWS. It turned out to be great fun to design and Giovanni Caselli is certainly a wonderful artist and did a great job I think.

What do you love most about what you do?

I love the people I meet, both through therapy and Tarot reading, as well as through teaching. I am always interested in people and if I can make even a tiny difference in anyone’s life for the better, I am happy.

Juliet, you have been teaching Tarot in one form or another for the best part of 30 years. How has the content of the courses you offer changed over this time?

I think the content changes as my life experience changes and as I understand more about the complexity of life. I certainly started life, as most people do, as the Fool, but I am definitely more like the Hermit these days! Which I am happy about, as it seems appropriate. I love the Hermit card, and long to become as wise and patient as the image portrayed. I draw on my knowledge of psychology for the Tarot and the richness of the Tarot imagery inspires my work as a therapist.

You lead a very full life! As well as producing 3 tarot decks and 8 tarot books, you are involved in teaching and administration at the Centre for Psychological Astrology in London, and you run your own private psychotherapy practice. What does the future hold in store for you? Do you have a dream that you would like to share?

Yes, life is full, and I like it that way. I love doing everything I do, the only thing I would like to have time for is more travel. I would like to travel around India, South East Asia and Africa, as well as having time to revisit many European cities. I guess my dream is to have enough time and money to do this at leisure, and in a certain amount of comfort!

Do you have a favorite Major Arcana card?

I like all the cards, to be honest, but I guess my favorite is the Star – the card